Considering the criminal events at our nation’s Capital Building on January 6th, 2021 and the incorrect media explanations and misrepresentations of III% symbolism, we members of the Sons of Blackwater Military Motorcycle Club issue this statement.
The III% symbol represents a core value, a constitutional right. Despite what some would have you believe, not radical, not racist, not violent.

The membership of this club unequivocally denounces the ideology of radical extremism, all beliefs in the supremacy of one race over another and all acts of violence perpetrated against law enforcement, our military, or the American people. Without hesitation we condemn the actions of all who took part in the attack on our Capitol.
First and foremost, we are Americans, believers in and defenders of the United States Constitution and the Bill of Rights. Particularly the 2nd Amendment. We are a “diverse” brotherhood of proud Americans, comprised of former military personnel, active duty military, and Patriots. It is our belief that without the 2nd Amendment; “you” may lose the 1st.

​Our definition:
During the American Revolution, the active forces in the field against the British King’s tyranny never amounted to more than 3% of the colonists. Three Percenters identify with this concept because they are true Patriots who are fighting for the freedoms of the nation we love. Three Percenters intend to maintain their God given natural rights to liberty and property. History itself, for good or ill, is made by determined minorities. Never underestimate the power of a small group of committed citizens to change the world. 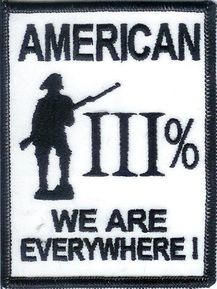 During the American Revolution, the active forces in the field against the King’s tyranny never amounted to more than 3% of the colonists. They were in turn actively supported by perhaps 10% of the population. In addition to these revolutionaries were perhaps another 20% who favored their cause but did little or nothing to support it. Another one-third of the population sided with the King (by the end of the war there were actually more Americans fighting FOR the King than there were in the field against him) and the final third took no side, blew with the wind and took what came.

The Three Percent today are gun owners who will not disarm, will not compromise and will no longer back up at the passage of the next gun control act. Three Percenters say quite explicitly that we will not obey any further circumscription of our traditional liberties and will defend ourselves if attacked. We intend to maintain our God-given natural rights to liberty and property, and that means most especially the right to keep and bear arms. Thus, we are committed to the restoration of the Founders’ Republic, and are willing to fight, die and, if forced by any would-be oppressor, to kill in the defense of ourselves and the Constitution that we all took an oath to uphold against enemies foreign and domestic.

﻿LINK TO THE CONSTITUTION﻿

We affirm and declare the following:

1. We will NOT obey orders to disarm the American people.

2. We will NOT obey orders to conduct warrantless searches of the American people

3. We will NOT obey orders to detain American citizens as “unlawful enemy combatants” or to subject them to military tribunal.

4. We will NOT obey orders to impose martial law or a “state of emergency” on a state.

5. We will NOT obey orders to invade and subjugate any state that asserts its sovereignty.

6. We will NOT obey any order to blockade American cities, thus turning them into giant concentration camps.

7. We will NOT obey any order to force American citizens into any form of detention camps under any pretext.

8. We will NOT obey orders to assist or support the use of any foreign troops on U.S. soil against the American people to “keep the peace” or to “maintain control."

9. We will NOT obey any orders to confiscate the property of the American people, including food and other essential supplies.

​10. We will NOT obey any orders which infringe on the right of the people to free speech, to peaceably assemble, and to petition their government for a redress of grievances.